BROCKVILLE, ONT. — Looking to tackle substance abuse in Brockville, a new anti-stigma campaign launched on Saturday by the town’s municipal drug strategy, to change the language associated with drug use.

The strategy formed in January 2020, to look at the underlying issues of drug abuse.

“We’re a collaborative group of people, organizations and agencies, that are looking to address the gaps in people starting to use drugs and what causes that,” McNeill added, which includes the Brockville Police Service and the Leeds Grenville & Lanark District Health Unit.

The poster campaign will run for six weeks, each week devoted to one of the pillars.

“The first week is just getting our message out of stop the shame, stop the blame, and stop the stigma so that people are aware that stigma is very rampant in our community,” said MDS vice-chair Tamara Baldwin.

Posters will be published through their social media channels and will appear in doctor’s offices and pharmacies.

“Our goal was for people to stop when the see one and go, ‘Oh, what’s this?’ and then read,” Baldwin said. “It’s a very quick read for a poster but it’s the fact that they state mother, educator, person that uses drugs because that’s everybody, it’s not just how it used to be.” 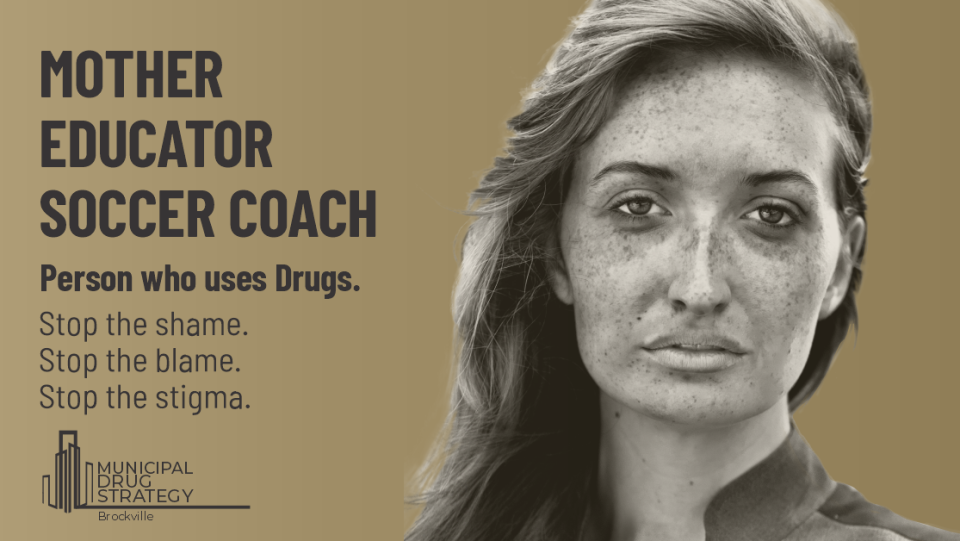 “The stigma around drug use, substance misuse, and housing and homelessness and mental health and all of the things that go a long with substance use,” McNeill said. “Stigma can be so debilitating that people resist reaching out for help. Then they can’t get the help that they need and then tragedy happens. Overdoses happen and deaths happen.”

McNeill noted the number of overdoses in the area is climbing this year, already higher than at this point last year.

“It’s up to all of us. We all have to take responsibility; this is a public health crisis and these are preventable deaths,” McNeill said.

Baldwin says the campaign has been used by other municipal drug strategies, noting it is hard-hitting and eye catching, with the aim to change people’s perception of drug users and the language associated with it.

“They are not addicts anymore, they are persons that use drugs,” Baldwin said. “They are not junkies or druggies or anything like that. They are people like you and me, so getting to that point is a great start.”

“I can access medical care very easily but the person beside me may not,” Baldwin added. “They may have already been to the hospital or a doctor’s office for a drug related issue and they see them as somebody who using drugs versus somebody who is not. They don’t get the care that they need and they don’t get the respect or support from the community because they just see the drug aspect of them, where they are a person just like you and I are.”

“We just want to get out there that a lot of people use drug and we don’t want to moralize the issue of drug use,” McNeill added, “that there are good people that use drugs and there are people that say bad people use bad drugs. We want to get that stigma out of there that so-called illegal drugs are not bad and people live with using them and it’s a medical issue so we want to treat is as such.”

The major point is to have people question themselves and have their biases against drug users disappear.